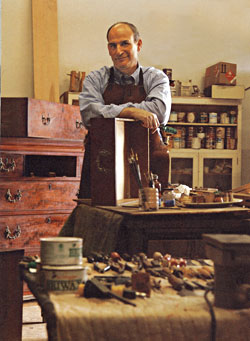 Jean-Jacques trained in France, both classroom and hands-on training & experiences, with all aspects of woodworking and architectural millwork. It was there that Jean-Jacques learned “I love antique furniture … anything with artistic expression.” It was there that he subscribed to the French Charter of Restoration.

After graduation, he moved to the United States and worked for architectural firms on both coasts before settling in the Chicago area and opening his own furniture restoration studio. He has since provided superior service based on his years of woodworking experience, which ranges from 18th century to contemporary pieces.

One night, a Lincolnwood man was awakened by a loud noise. “Could it be an explosion?” he wondered, “Could it be a burglar?” What the man discovered was not an explosion, nor a burglar, but a huge 150-year old clock, a valued family heirloom, broken into hundreds of pieces, after having fallen from a wall in the man’s house. This man called Jean-Jacque’s Furniture Studio to see what, if anything, he could do about his heirloom, which was now spread out in hundreds of broken pieces. The clock owner swept all the pieces he could find into a bag. He brought them to this established antique and contemporary woodworking furniture studio and waited to see if anything could be done to salvage his clock. When shortly thereafter he picked up the clock, he said to the studio’s proprietor, Jean-Jacques Bernard, “It’s incredible! You’re a magician!”

Jean-Jacques Bernard takes great pride in his history of meeting and exceeding his client’s expectations, while maintaining the integrity of the original woodwork. With people like the Lincolnwood man above who received his broken clock back in one seamless piece, he has earned a reputation for high-quality work, great attention to detail, and sensitivity to his customer’s time and budgets.

View Us in Chicago Home Magazine